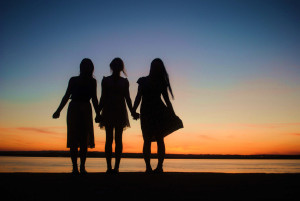 “For where two or three gather together as my followers, I am there among them.” -Jesus Christ

A cord of three strands is not easily broken.

Another awesome form of community, in addition to partnerships of two, is the triad. This is a very fancy word for “three people.”

We talked yesterday about my spiritual partnership with Dave and how powerful it has been in my life. God has also gifted me with a wonderful and deep partnership with my good anamchara, Todd. Even as a pastor, he realized the great benefit and necessity of this focused form of community. Or maybe I should say especially as a pastor. So if you think me crazy, and I don’t blame you as I often doubt my own sanity, there’s at least one pastoral endorsement here.

Todd hooked me up with Rex, and we formed a triad of partnership sometime around a year ago. Since they both have the last name Fisher, I like to call us “Roberto Y Los Pescadores”, which Rex tells me was an academy award nominated foreign film from 1987. (There’s a little controversy on this title for us since my name appears first.)

There is great power in triads. It is laser focused on our seeking of God and supporting one another. It’s small so that no one gets lost or can hide in the corner. “Hey Rex, what are you doing back there by yourself?” doesn’t happen due to the extreme awkwardness that would naturally ensue due to the nature and intensity of a group of three. There’s also a beauty if, like in this group, you have three pretty different personalities. (If you’re into the enneagram, we are a three, a four, and seven) This is helpful for the other perspectives they bring, always out of care. You don’t wanna meet with two other people just like you if you really want to pursue growth. You’d probably just end up telling each other how awesome you are and that there’s no need to change a thing. Hey, that sounds nice, actually!

By the way, the picture at the top is of me, Rex, and Todd before those two cut their hair. I believe it captures well our friendship and what it means.

So I’ve been wondering lately if our Sunday gatherings and small groups should have as a focus, the facilitating and funneling of people into these triad types of partnerships. The small group thing was really “it” for a while in churches, and they’re good, but I hear all the time of people getting lost or not being challenged there. Some of this is simply due to the size of the group. We do need both the big gathering and the house church groups I feel, or else we’d all just be running around wondering where to find and meet with Christ followers.

These small focused partnerships, though, are where people are experiencing some really awesome growth because of the safety to share and confess, and the intense care of the soul that this type of group is more conducive to.

The blessing I’ve received and still receive from these Fisher men is off the charts. Knowing that they love me deeply and that I can call them at any time about any thing is a great comfort to me. They only want the best for me, plus Todd buys me books and Rex installs new water heaters and things in my house. Just sayin’. 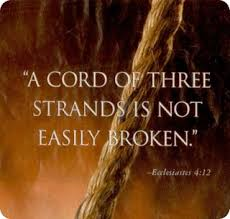 In the Name of Jesus,
Soli Deo Gloria